You are here: Home1 / News2 / Living with hoarding disorder

As people begin to understand the real causes – and very real dangers – of hoarding, bpha’s work to improve the lives of tenants living with the disorder has been shortlisted for a national award.

It’s only been four years since hoarding was officially classed as a disorder in its own right, but bpha has been aware of the issue – and has been working to help its tenants live with it – for some time.

Still largely misunderstood by the general public, hoarding can have a serious impact on a person’s life, affecting how they live in their own home. It can even create a fire hazard for them and their neighbours, as clutter takes over living spaces and spills into shared hallways, gardens and onto the street.

Cathy*, 69, has lived in her bpha home in Clapham, Bedfordshire, since 1976. She moved in with her husband just before Christmas of that year, and remembers they spent an enjoyable – if a little unusual – Christmas Day taking down the sheets at the windows and putting up curtain rails. It was their first real home together and now she can’t imagine living anywhere else. Cathy describes herself as a collector, but admits that her love of ornaments, books and clothes probably began to worsen after the death of her husband in 1995.

Her collections steadily built up over the years, until bags of clothes and stacks of books and ornaments covered nearly every inch of living space. ‘I couldn’t get into the front room properly without moving bags that were sat on the table and the settee,’ says Cathy.

Before she found support with bpha’s De-Clutter Group, she had to stand up in the kitchen to read and eat meals. Now, thanks to bpha’s help, she’s able to sit on her settee and read – a passion she’s not been able to fully enjoy for ages, despite being surrounded by the books she loves.

‘I read a book [When Breath Becomes Air, by Paul Kalanithi],’ Cathy enthuses, ‘and I stayed up all night! I couldn’t put it down. I started reading at 11.30pm and I finished it at 5am! I was really interested. It’s been a while since I could do this. And I can sit at my dining table and eat.’

bpha’s approach to hoarding has been so successful that it was shortlisted in the Outstanding Innovation of the Year category in the UK Housing Awards 2017. After a successful bid to the Harpur Trust for funding, it began working with Hoarding UK to set up training for its Home Agents dealing with hoarding cases. It also created a support group for hoarders, which helps tenants to try to improve their situation, lower the risk to other tenants and retain their tenancies.

bpha’s monthly De-Clutter Group meetings, held in Bedford, are a mainstay of its support service, where tenants share what they have done with specialist workers like Janette Hayden. Janette encourages each person to give themselves an aim. For Cathy, with her love of clothes, this has been to buy something for somebody else instead of herself.

‘It was a good idea,’ says Cathy, who is now looking to buy something for women and children in the local refuge for battered wives. But her first purchase was a blouse for her friend, which she spotted as they wandered around Sainsbury’s.

Cathy describes the De-Clutter Group sessions as welcoming and friendly – almost like family – with biscuits and homemade cakes shared between members.

The support bpha has given Cathy has made a real impact on her quality of life, and she says she would endorse its support services to any bpha tenant in need. ‘I would recommend Janette’s group because it’s very friendly and helpful,’ says Cathy. ‘They’ve done a good job. I’ve found the group very beneficial. I do still like [having] things, but I do need to trim down a bit more.’

Winners of the UK Housing Awards 2017 will be announced at a ceremony on 26 April, at the Lancaster London Hotel.

*Name has been changed to protect her identity 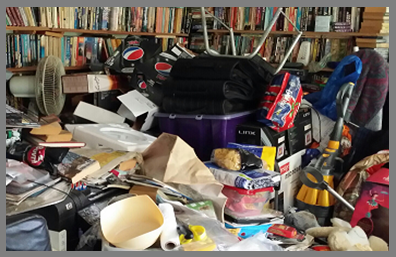 Tenants living with hoarding disorder can put their tenancies – and lives – at risk without the right support network around them. So if Cathy’s story resonates with you, or a fellow bpha tenant who needs more help, call bpha’s Supported Housing Team. They can give you the support and advice you need to make your life living with hoarding more manageable – and safe.

Call them now on 0330 100 0272, email them directly, or visit hoardinguk.org for more information and advice about hoarding disorder.

A Playle on words
Scroll to top