Sustaining tenancy with help from our Money Advice scheme

You are here: Home1 / News2 / Sustaining tenancy with help from our Money Advice scheme

A bpha resident in Bedford who was facing eviction following the death of his mother has turned his life around thanks to help from our Money Advice team.

Mr Jones* suffers from mental health issues and has fallen into debt with his rent owing over £4,000 following his mother’s death as the tenancy was in her name.

He was referred to the Money Advice team by his Home Agent as his illness prevented him from working and he didn’t have hadn’t any benefit in place to support himself. However, our Money Advice team soon helped him to claim the Universal Credit he was entitled to and apply for a Discretionary Housing Payment to clear his rent debt and help put his life back on track.

Ashley Mattin, Trainee Debt & Benefit Advisor at bpha, said: “During the initial appointment the plan was to support Mr Jones with an online universal credit claim. As he didn’t have an email address, I firstly supported him getting this set up.

“He then went to his bank to set an account up to ensure the money could be paid to him. We eventually got his universal credit claim up and running.

“We also helped him complete additional welfare benefit applications to support him further.”

Mr Jones now has Universal Credit in payment and an arrangement set up to pay his rent on time each month and is much happier as a result.

“He now doesn’t have the stress of debt on his shoulders as the rent debt is clear,” explained Ashley.

“He has an arrangement to pay his Universal Credit housing element every month to his landlord and has direct debits set up for his other bills.

“His whole attitude towards life has changed and he is now on the way to being able to manage his tenancy successfully with the help from the Money Advice team.”

If you need any money advice or are in financial difficulty, please contact our Money Advice service, which is confidential, independent and free to use, by calling 0330 100 0272.

*Name has been changed to protect his identity 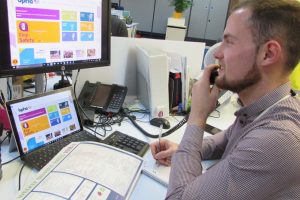